The concept of ‘tipping points’ was popularised by the author Malcolm Gladwell in his 2000 book: “The Tipping Point: How Little Things Can Make a Big Difference”, describing the phenomena as “when an idea, trend, or social behaviour crosses a threshold, tips, and spreads like wildfire”.

Scientists have discovered such dynamics can be found across a wide range of domains in natural and social systems with different temporal and spatial scales. Usage of the term varies, from the more metaphorical sense of an initial spark that spreads like wildfire, to abrupt ecological regime shifts, to critical transitions in bifurcation theory in mathematics. An increasingly widely adopted formulation in Earth and climate sciences is

A tipping point is the threshold at which a small perturbation causes a large qualitative change in the future state of a complex system¹ Lenton et al (2008),

which is similarly applicable for socio-economic systems² Milkoreit et al (2018). This nonlinear response („the outcome is not proportional to the input“) usually occurs when there is a strong self-reinforcing feedback amplifying the initial perturbation up – a small change in A leads to a change in B which in turn leads to more change in A et cetera³ climatetippingpoints.info.

For many processes, this runaway effect can happen quite rapidly (i.e. faster than the perturbing force), like seagrass transitions⁴ Biggs et al (2018) or fisheries collapse⁵ Carter et al (2003). However, these dynamics can also unfold on much longer time scales such as in the case of ice sheet disintegration, where a continued self-accelerating melt is expected even in the absence of further global warming⁶ Kopp et al (2016).

Systems that can hit tipping points are a reason for concern as they lead to large — and often rapid and practically irreversible — changes, the dynamics of which are determined by the system itself rather than what we do about it. Examples include segregation on the city level¹ Schelling et al (1971) or the eutrophication of single lakes² up to collapse of societies³ Downey et al (2016) and degradation of entire ecosystems like the Amazon rainforest⁴ Nobre et al (2016).

For climate, a selection of major climate tipping elements have been identified based on paleo-evidence and process-based models, which govern the state of the entire Earth system⁵ Lenton et al (2008)⁶ Armstrong McKay al (2008). Some of these climate tipping points are already potentially within reach⁷ Lenton (2019), and “early warning signals” have revealed signs of destabilisation that suggest some of these are approaching criticality⁸ Boers (2021)⁹ Boulton et al (2022).

As these elements are connected to each other and a multitude of drivers (global warming, deforestation, pollution…) are at play, it’s possible that there could be a “tipping cascade” if one element tipping makes another element tip and so on¹⁰ Wunderling et al (2021)¹¹ Steffen et al (2015). Given the potential time lag between triggering an element and its full impact unfolding, climate tipping points connect today‘s (in-)actions to the state of the Earth inherited to generations far in the future. 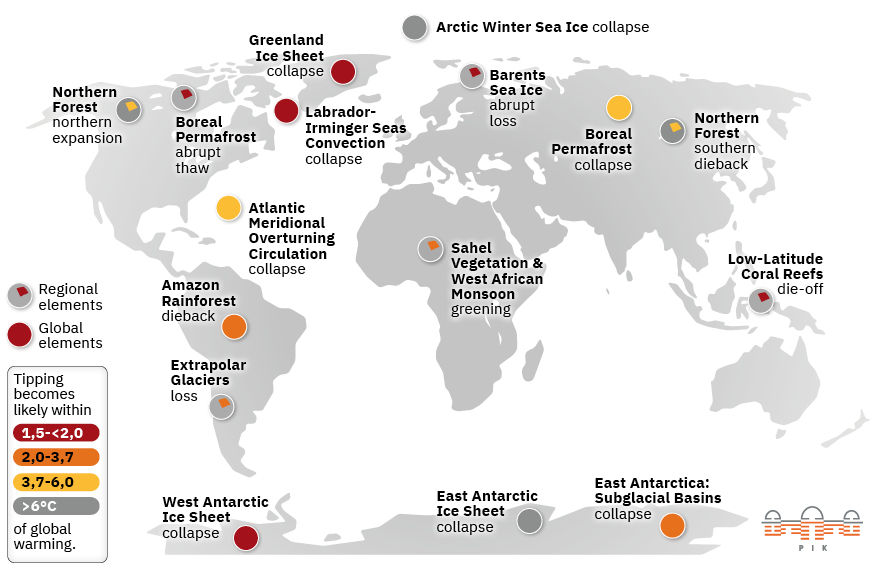 The geographical distribution of global and regional tipping elements, color-coded according to the best estimate for their temperature thresholds, beyond which the element would likely be ‘tipped’. Figure designed at PIK, based on Armstrong McKay et al., Science 377, 1171 (2022). Click on image links to the PIK infodesk for a detailed description of all the elements.

However, this rapid upscaling of an initial little spark (perturbation) to a large change can also be „a reason for hope and source empowerment“¹ Lenton (2020). How can we use the science – social as well as natural sciences – and our understanding of the dynamics underlying tipping points to help facilitate rapid social and political change for a just transition towards a sustainable future?

Research shows that there are preconditions for successful positive tipping – the system has to be ‘ripe’. Moreover, there has to be capability to facilitate and follow-through the changes, and also overcome resistance from vested interests. Various reports and articles analyse these dynamics and explore prototype recipes for triggering positive tipping⁵ Systemiq (2021) ⁶ FOLU (2021) ⁷ Lenton et al (2022). Many emerging initiatives (Earth4All, Rapid Transition Alliance, Social Tipping Points Coalition, to name a few) push for rapid transitions based on planetary boundaries, sustainability and justice principles. A common element in their efforts is the aim for snowball-effects to change standards and behaviour radically on a mass scale – positive tipping.